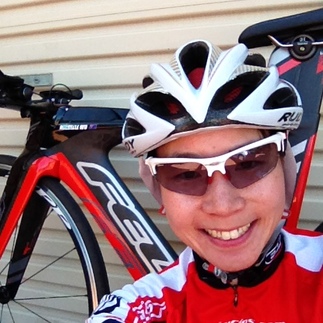 Born in Sydney but raised in Canberra, Michelle was a late comer to Triathlon.  Through school she was always a active kid, trying everything from soccer, little athletics, softball, netball, basketball, swimming and piano lessons.  In the end, swimming and basketball won out as she went through high school at Canberra Girls Grammar.  She then went onto to University of Wollongong with an Undergraduate Scholarship, completing a Bachelor of Science degree in Physics with Distinction in 2003.  She kept fit by visiting the uni gym and pool, and occasionally running, but a career as an athlete was the furthest thing from her mind!  She was introduced to triathlon through the Illawarra Triathlon Club at a low key club aquathon at the university pool, and was immediately captured by the excitement of combining 3 different sports into 1!  In 2004, she joined Tridents Triathlon Club in Canberra, and under the guidance of coach Ben Gathercole,  had a speedy rise in the sport becoming the 2008 World Age Group Champion at the Vancouver World Championships.  2009 was her debut year in the Professional Ranks and definitely a year of valuable learning experiences racing all over the world.  In 2010 she turned her attention to long course racing, and the pocket rocket from Canberra has racked up several 70.3 wins since.   Well  known in the triathlon community, Michelle is a face that is approachable, marketable, and one that is fiercely determined to achieve at the highest level.  Stay tuned as we follow her journey!